The capacity is on point, you have to bring it down to 3.0v per series and give it a slow charge @ (2@mps) to get the capacity. Nice polymer case, it would be nice if 10 gauge wire was used but I understand they're matching 1/10 scale wiring. My only con would be the internal resistance is much higher than I would expect, settling roughly at (3.8 - 4.0 per) during charge. Might be the cell but honestly it could be inaccurate because of the balance plug not being the greatest design or maybe connector quality. Both series balance perfect, it has three charge cycles so far. Picture is of the 5200mah and it gives me the roughly the same resistance 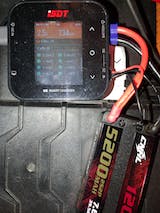